You are here: Home / What You Need To Know / Baby Milestones: The First Two Years

For anyone who has never had a baby, it can be difficult to understand how thrilling it is when your little girl or boy passes those important developmental markers. When a baby smiles at you for the first time or says her first word, this can seem so momentous that you may feel like calling everyone you know to tell them the earth-shattering news. But beyond the emotional impact of these milestones, they are also important markers signifying that your baby is developing at a normal rate. Here are seven of the most important baby milestones to watch for during the first two years. 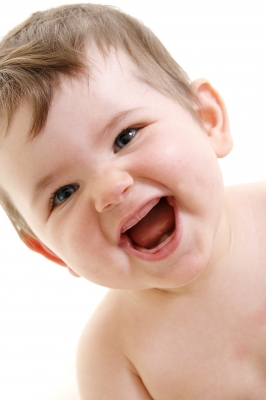 Eye contact is an essential component of human interaction, and the fact that newborns do not do it is a sign that the social parts of their brains are still undeveloped. However, by about 6 to 8 weeks, your baby should begin to register your face, which will soon result in eye contact. At this stage, the baby recognizes that you are a person and is ready to begin consciously communicating with you.

After a month or two, the social development of your baby will begin to accelerate. In addition to making eye contact and cooing, he will begin to recognize that gestures and facial expressions can be meaningful, and he may even start imitating you. One of the biggest signs that your baby is developing at a normal pace is that he begins reciprocating your smiles, which usually happens at around two or three months.

For the first few weeks, a baby communicates mainly by crying. After that, she starts learning how to make vowel sounds in the back of her throat, resulting in cooing sounds that are sometimes triggered by the voice of a parent. Then, by about six months, most babies start babbling. This is more complicated than cooing in that it requires the tongue and results in consonant sounds in addition to vowels. Soon thereafter, the baby should start babbling back to you when you talk to her. 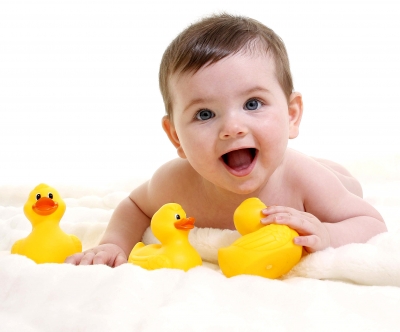 From birth, many babies instinctually grab things that are placed in their hands, but it takes a while before they begin to intentionally reach out for things. This usually happens by the three-month mark, and it signifies that the baby has learned that he or she can directly interact with the world. It is the first step toward more advanced developments like crawling, standing, and feeding herself.

Soon after learning to crawl, most babies begin trying to stand. It starts in an effort both to reach things and to imitate the people around her, and it soon becomes a habit. Usually happening at around 9 to 10 months, it signifies that the child is developing her own personality, and it shows that her leg muscles are growing normally. Now, it is only a matter of time before she takes her first steps.

Now that the baby has become better at babbling, has mastered some gestures, and has figured out that he can get things from people by communicating, it is time to start talking. At around 12 months, the vocalizations become highly responsive and even imitative, and soon afterward you may begin to hear sounds that closely resemble words. Meanwhile, you will also notice that the baby is beginning to understand common phrases and commands. Look for the first words to come at around 18 months, but do not be alarmed if it takes a little longer.

Lisa Pecos is a wife and well accomplished writer whom firmly believes in natural colic treatments for infants. She has authored numerous articles in Baby Care Journals on the topics of toddlers, kids and teenagers.