You are here: Home / Shoes For Kids / Choosing Footwear for Your Children 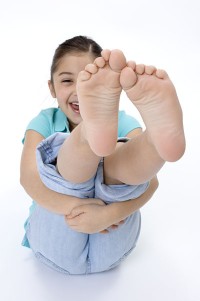 Childrenâ€™s feet grow and change as quickly as the rest of their bodies, and it is very important to bear this in mind when choosing footwear for your children; a childâ€™s foot is not a miniature version of a grown adultâ€™s foot. Early on, a childâ€™s developing foot is mostly cartilage, to be replaced with bone as they grow. Traditional shoes and the conventional wisdom of the past might not necessarily be the most useful.

Nearly 80% of people ages 21 and older have had a foot problem, according to a 2012 survey from the Institute for Preventive Foot Health, and ill-fitting or incorrect footwear is attributed as the major cause of most common foot problems. Incorrect footwear can lead to the foot striking the ground with the rear of the foot as opposed to the fore-foot, which translates less kinetic force to the rest of the foot and leg. This means less injury to runners. For much of history, runners were barefoot or wore minimal protection such as sandals or moccasins. This is even more important to bear in mind when considering shoes for children, whose feet are more flexible but have not completed their growth.

Childrenâ€™s shoes have until recently been, for the most part, simply copies of adult sized shoes, often stiff and overly supportive, with extra padding or reinforced heels that raises the childâ€™s foot off the ground, making walking and running less natural. As such, a minimal approach should be considered for your childrenâ€™s footwear. Choose shoes that have thinner soles to allow the body to naturally sense the position of joints and adjust as needed (called proprioception). Thinner soles are preferable to thick, elevated ones or shoes that have a sloped angle from front to back; active children need to have more control on their movements for running and jumping, and a thick sole can hinder that. Choose shoes that are made of soft, bendable materials, such as these childrenâ€™s sandals from reef.com. Often the best shoes are made from natural materials such as leather or hemp, which can be easier to keep clean and are generally more durable if well-cared for.